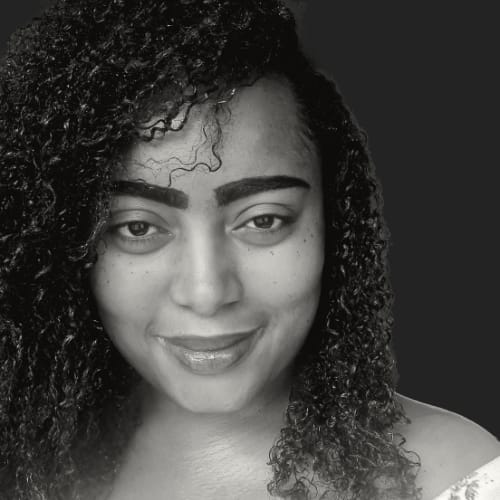 Trishauna Stewart is a British-Jamaican researcher, writer, educator and activist.

Inspired by her early/formulative reflections, Trishauna philosophises on, what she calls self-identifications of auto-positionality (in the cosmos), and the onto-morphologies of diaspora processes. Through critical poetics, she makes critical enquiries into her (in)herent individual/collective (Jamaican) diaspora status. She attends to the epistemologies supporting Caribbean movement and delves into personal activated/re-activated thought on diaspora ontogenesis; which gesture her urgent movement towards investigating colonial/post-independence and the cause/effect depth of pre-determined Jamaican diaspora production.

Her 2018 MA thesis, completed at Goldsmiths, University of London, allowed her to initiate research on such enquiries. In this work she completed an examination of the historical trajectory of the deductive, negating and anti-linear, progressive circularity of productive patterns of ‘enforced dispersal’ from Jamaica.

In her PhD Project, Trishauna will re-expand her focus, to critically and connectively re-open and trace reproduced/reproductive patterns of movement as relative to the fictionality of forms of independence. She will provide a new framework (pyro-spectral politics) in order to think through the nature and naturalisation of Caribbean diaspora production and its inter-national, inter-diasporic, political re-historicisations and re-spatialisations of Empire and Imperialism.

The element of fire – which emerged in her 2018 work as an effect of the post-independence violence of diaspora and failed movements towards decolonisation – adds a significant articulatory layer to her political-philosophical framework. It also allows presence to be recovered within/through the ecologies of its moving, trans-sourced propensities to act with/by/through force(s).

Trishauna’s academic contributions have reach beyond the aforementioned work. In her journal article, “Spectral Vibrations: Discovering and Recovering Lost Bodies through Jamaican Sound”, she introduces sontology to Sonic Studies, capturing and recognising the entries and departures of Jamaican colonial pasts and colonialities present within the Jamaican (origin/diasporic) sound-realm.

She has also contributed to conceptualisations of Caribbean philosophical-intellectual tradition; considering the totalising yet dependent aspects of culture and thought. Further, her academic work and presentations have also crossed the research areas of: Black British Activism/Female Activism, Archival practices, Politics and Philosophy, Caribbean History, Race and Education, Cultural Transmission and Legal Justice.

Currently, she is considering the coloniality/decoloniality of femicide and climate justice in the Global South.

Additionally, committed to the advancement of Caribbean, African and Asian youth – locally, nationally, and internationally, Trishauna has designed and taught courses and mentorship programmes. Her service in teaching and mentoring spans almost-a-decade. Further, independent systems of education and media, developed by Trishauna, serve to equip Global South diaspora communities with combative vigour and the momentum to dismantle structural inequality, non-representation, disconnectedness, and dispossession.

Trishauna also possesses a wealth of writing experience and is the author of a forthcoming historical biographical narrative on the life of a British-Jamaican (Jamaican-born) social justice campaigner. Through her experimentations with new practises of seeing diasporic life, in this work, she is able to uncover the movement towards unifying British-Caribbean communities via the creation of educational, social and cultural institutions/spaces.

Trishauna encountered the work of Stuart Hall at A Level, beginning with Reception Theory. The work of Hall has supported Trishauna’s; progression along academic paths, her engagement with conceptualisations of Caribbean cultural and diaspora identity, and desire to write back from a position of dis- and mis- placement. Hall is one of Trishauna’s intellectual inspirations and thus, this Studentship provides a personal arrival at a key position of academic fulfilment – she celebrates the formal academic alignment of her work with the work and values of Hall. Trishauna aims honour the work of generations before, determined to inspire those to come.